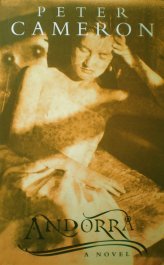 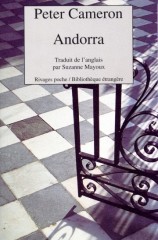 There's something a little "off" about Peter Cameron's Andorra — the place, not the novel. It's a Mediterranean coastal town, for one thing, unlike the landlocked principality in the Pyrenees. It's also full of preposterously named residents (Sophonsobia Quay, Vladimir Afgroni, etc.) who take an unsettling interest in the newcomer in their midst: an American fleeing a failed life shrouded in mystery. Reading like a collision between Noël Coward and Franz Kafka, this recently reissued 1997 novel may be Cameron's masterpiece.
Michael Upchurch, Seattle Times arts writer

After a devastating personal tragedy, a man leaves the United States to begin his life abroad. The country in which he finds himself is inordinately influenced by his imagination, and the events there are eerily reminiscent of his past, especially when he begins to fall in love with two women simultaneously.

Andorra is a small country, populated (almost exclusively) by the ancient Mrs. Reinhardt, who outlives her lifetime lease on the penthouse of the Hotel Exelsior; the Dents, an Australian couple who share a first name, a huge dog, and a secret; Sophonsobia Quay, the kayaking matriarch of the powerful Quay family; her two beautiful but troubled daughters; Esmeralda St. Pitt, who runs a boardinghouse for those with impeccable moral credentials; Ali, the fatalistic purvyor of coffee; and Alexander Fox, who finds himself not only in a foreign country but also in a crisis of faith, conscience, and identity.

A sinisterly beautiful novel about deciet, desire, and the persistence of memory, ANDORRA is a dazzling leap of the imagination.

Published in 1997 by Farrar, Straus and Giroux (editor: John Glusman) and the following year in paperback by Plume; now available in paperback from Picador.

ANDORRA is being made into a film produced by Jump Street Films from a screenplay written by Cameron.