The City of Your Final Destination was published in hardcover by Farrar, Straus and Giroux in May of 2002 (editor: John Glusman)and in paperback by Plume in May of 2003. City was a finalist for both the PEN/Faulkner Award and the Los Angeles Times Book Prize. Film rights for the book have been optioned by Merchant Ivory Productions. This book is currently out of print. 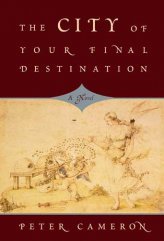 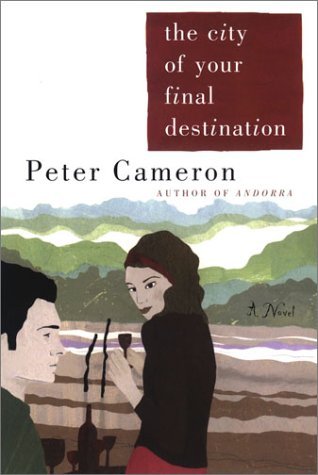 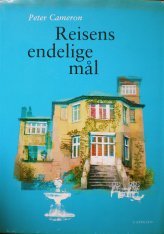 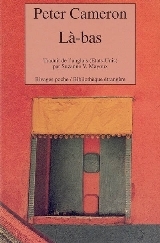 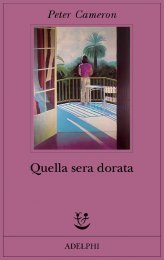 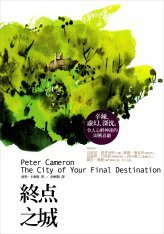 The City of Your Final Destination

PEN/Faulkner Award Citation
written by Gail Godwin
presented at the
Folger Shakespeare Library
in Washington, D.C.
on May 17, 2003

“Finished a magical novel called The City of Your Final Destination, and now I don't have it to read anymore.” I wrote in my notebook in May of 2002. I missed the book so much I went out and got the author's other books, read and relished them, and then returned for a re-reading of The City of Your Final Destination. In my second plunge into this eerily satisfying novel of morals and manners and transformation, I was able to pinpoint the places where Mr. Cameron, a writer whose star gets sharper and brighter with every book, has demanded more from his craft than ever before: in City, he surpasses himself in lightness of touch and narrative drive, and in his capacity to convey the subtle giveaways that reveal character and emotion.

The protagonist of The City of Your Final Destination is Omar Razaghi, an Iranian-born graduate student at the University of Kansas who fudges his application for a fellowship to write an authorized biography of recently deceased Latin American author Jules Gund without obtaining authorization from the Gund estate. After the university gives him the grant, the estate denies him permission. Omar's aggressively supportive girlfriend goads him into traveling to Uruguay and petitioning Jules Gund's family to change their minds. Omar does and is instantly received into a bee's nest of intrigues and eccentricities. The family, living together on the isolated and decaying Gund estate, includes the author's widow, Caroline; his mistress, Arden and Portia, their young daughter; and Gund's elderly brother Adam, and his lover, Pete -- every one of who is both formidable and flawed in her or his own unique combination. Omar's unannounced arrival upsets their fragile co-existence, and they, in turn, lead Omar to question to what degree, if any, he has been the author of his own existence up until now.

The City of Your Final Destination is a dream of a good read, a quest novel that hatches into a novel of transformation, and then goes on to transcend itself again in a daringly beautiful and surprising ending."

“Manners and morals, a combinant phrase long out of fashion, finds exhilarating rebirth in City. Subtly, affectingly, erotically, the author traces the beginnings, the hesitations, the advances of a love affair . . . [A] pungent, airy, grave and transporting commedia dell’arte. Mr. Cameron’s largest achievement, however, is the conversations. Ferocity, sadness, humor and a groping toward discovery propel them. They are so textured, nuanced and many-leveled as to defy quotation.” -- Richard Eder, The New York Times

“The title of Peter Cameron’s intriguing new novel has such verve that it is surprising to find that The City of Your Final Destination is an English drawing-room comedy, albeit one set in Uruguay. This theatricality, a touch of Rattigan or Wilde, rather suits the peculiar menage into which Omar Razaghi arrives . . . Cameron is good at the confusion of desire and fear, at physical shock and the problem of trying to behave correctly when a situation breaks the rules. The characters resolve this . . . with prickly generosity and an all-around lack of sentiment, bringing this singular work to a finely orchestrated conclusion.” -- Lavinia Greenlaw, The New York Times Book Review

“A lightly comic novel as splendid as Peter Cameron’s The City of Your Final Destination is a cause for celebration. A beautiful and elegant novel in which slightly bewildered characters are stirred by love . . . [it] has the lightness and airiness of Shakespeare’s A Midsummer Night’s Dream. Driving the narrative is Cameron’s delightful touch – his beautiful lines and comic scenes, his facility for revealing characters through grace and economy, his witty dialogue. One would be hard pressed to find a more felicitous comic novel, or a more lovely and witty story about the human spirit as it responds to the urgings of love.” -- James Schiff, The Raleigh News & Observer

“A group of characters . . . are forced to reconsider their relationships to one another when strangers appear in their midst. It’s a winning scenario for Cameron, a brilliant conjurer of the nuances of shifting human relations. Like [Elizabeth] Bishop, Cameron never gives too much away at once, preferring to watch his subjects closely and carefully, rewarding his readers with the steady authenticity of every observation made along the way.” -- Eve Claxton, Time Out New York

“It takes a certain slight of hand to write a novel that is so infused with place . . . What’s sly about this novel is that the bigger dramas are kept offstage . . . Cameron has crafted a fascinating domestic drama . . . succeeds as a comedy of manners that pokes fun at literary careerism and turns entertainingly on people who are not happy, and would not admit it if they were. I kept envisioning this as a cross between a West End Edwardian play . . . and a Merchant-Ivory production. Cameron has always had delicate touch . . . with one devastating stroke of a line, could evoke an entire substrata of emotions.” -- Marina Budhos, Los Angeles Times

“There’s loads of potential comedy embedded in this facet of the job, and Peter Cameron seizes upon it in his wonderful new novel . . . a lark of a tale about a bumbling biographer who, in the process of researching his subject, received one hell of a sentimental education. Cameron possesses a lithe and subtle wit, but he is careful not to overplay it here. While his cast’s repartees and power plays make The City of Your Final Destination a swift read, there are some deeper issues at stake besides laughs. We cannot engineer our own happiness, Cameron suggests here with a terrific subtlety, for love has a way of taking us on unexpected detours. Cameron . . . draws this sweet novel to one of the most satisfying denouements in recent memory.” -- John Freeman, San Francisco Chronicle

“Henry James would have liked Peter Cameron. This captivating new book . . . compresses issues of identity, belonging and connection among diverse peoples into one tiny Uruguayan homestead. Readers who immerse themselves in the Gund family’s knotty presence will be impressed by the novel’s intelligence and narrative drive.” -- Publishers Weekly (starred)

“An exceptionally moving and self-assured account of the odyssey of a young academic. Witty, intelligent, engrossing: Cameron offers a leisurely and old--fashioned narrative that nonetheless moves directly to a surprising but credible end.” -- Kirkus Reviews (starred)

“Cameron . . . demonstrates a carefully honed style, an eye for insight and humor, and an ability to create a story that is both substantial and aesthetically pleasing.” -- Library Journal

“A novel of stunning achievement. Peter Cameron has given me a wonderful surprise with The City of Your Final Destination . . . fascinating, original, and highly recommended.” -- David Rothenberg, WBAI FM/NYC

“Peter Cameron holds up a mirror to confused youth, but he does so with all the control of a seasoned novelist. The result is refreshingly sophisticated yet touching, with just enough embarrassment and urgency to remind us of our own youth.” -- Polly Shulman, Newsday

“If The City of Your Final Destination were elligible for the Man Booker Prize I would be pressing for it to be on the shortlist. It has all the qualities currently undervalued on the literary scene: understatement, humor, and a dispensing with pedestrian naturalism . . . the other element which makes it so unusual today is that is, finally, a happy book – a book about the potential for human beings to grow into gravity and grace. Cameron . . . explores the complex ways in which by small acts of faith and courage . . . we can, and do, shape our destinies. The City of Your Final Destination celebrates the creative powers of love.” – Salley Vickers, The London Times

"The novel that has impressed me most this year is Peter Cameron's The City of Your Final Destination. It is . . .one of those novels that seizes you, roc-like, and takes you into its power -- an experience comparable with the mysterious thralldom of a dream. It is also achingly funny in parts." -- Bevis Hillier, The Spectator

“The City of Your Final Destination has depths of mystery and charm . . . suavely, languidly written . . . the overall effect is of a pleasurable melancholy, a sophisticated, slightly old-fashioned romance.” -- Lindsay Duguid, Sunday Times (London)

“There are two opposing forces in Cameron’s fiction . . . It is not always clear which is which and that is what gives his vision depth and charm. As with Jane Austen, who would appear to be a big influence, there is a great deal that can be seen through the focused prism of a love story. A dark contemporary version of a comic pastoral . . . good enough to deserve various debased adjectives: magical, wonderful, enchanting.” -- Theo Tait, TLS, (London)

“Peter Cameron’s novel possesses all the intriguing and playful elements of a Borges fiction. The novel does uncover something extraordinary . . . it is a tender story -- told with huge doses of wit and humour -- about both destinations and destiny, about the strange journey of life and the shifting concept of home.” -- Lucia Graves, Daily Telegraph (London)